Leading archaeologist Olivér Gábor wanted to visualize the history of Pécs for a long time. He contacted me in 2012 to talk about a virtual reconstruction of Sopianae at the end of the IV. century AD. We wanted to show not just the grand and luxurious side of the city, but also the everyday life of the average citizen. The visitor should walk freely in the virtually reconstructed city, discover the scenes in his/her own pace.

The work started in the end of 2013 with collecting the available data, publications, photos, drawings.

Map of the excavation at Teréz street.

21 objects, coins, glasses, samian wares, iron tools destined for showcasing both in the permanent exhibition and in the reconstruction were photographed from all angles to aid the 3D modelling process.

Phases of the reconstruction of an ink pot

Out of 8 possible scenes a palace, a city house with bath, and a square with a granary and shops were chosen for the first round.

House of the Mercator.

Square with the granary and shops.

Palace of a wealthy man.

Visitors can control a virtual time traveler, walk and look around like in an fps video game. In the vicinity of a featured artifact an outline indicates that it is clickable, if done so the screen changes to a showroom with the enlarged object and it’s description. 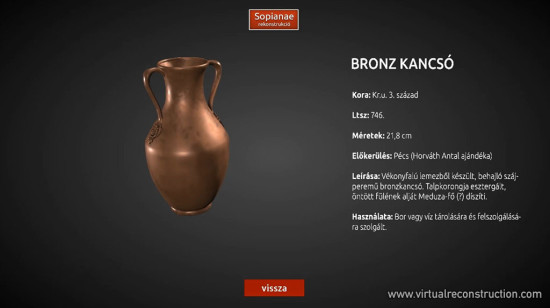 Characters were based on real life people.

Models for the characters.

There were 258 models, 323 textures, 233 materials made for this project, all from scratch.

Made with Unreal Engine 4

An interview with the curator, and usage of the application: https://www.youtube.com/watch?v=NlVgrMwaWKk